Forest managers are turning more and more towards practices respecting the natural variability of ecosystems, and to the maintenance of ecological processes. It is therefore necessary to understand how human activities have impacted forested landscapes. The overall objective of this thesis was to reconstruct the pattern and processes of anthropogenic landscape transformation since the early nineteenth century in the Lower St. Lawrence region in eastern Quebec. 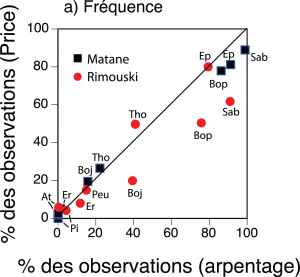 In the first chapter we used an early forest inventory to validate data on forest composition contained in the archives of the original land survey of Quebec. Results demonstrate that the land survey records provide a robust portrait of the pre-industrial forest. Most tree taxa were noted and ranked by surveyors according to their relative abundance across landscapes.

The objective of the second chapter was to determine how forest composition was re-organized over the last two centuries. We compared the pre-industrial forest portrait reconstructed from the early land survey records with the current composition based on recent governmental forest inventories. We observed a dramatic increase in the frequency of hardwoods in the forest, including sugar maple (Acer saccharum Marsh), trembling aspen (Populus tremuloides) and white birch (Betula papyrifera Marsh).  The increased occurrence of anthropogenic fires in the region during the first half of twentieth century and the ability of aspen to rapidly colonize burned sites may explain its expansion.

Aspen prevalence in the ninetieth and late twentieth centuries in eastern Québec. Each square cell covers an area of 5 km x 5 km.

This increase was accompanied by a decrease in conifers species that dominated pre-industrial forests, such as spruce (Picea spp.) and cedar (Thuja occidentalis.L). However, balsam fir the most prevalent and dominant species, has remained stable. 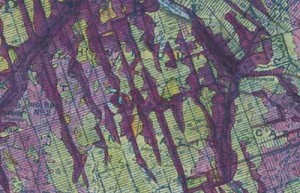 In the third chapter, we evaluated the impacts of anthropogenic fires on landscape structure and species distribution. We analyzed a land use map produced during an aerial survey in 1938, at the height of the European settlement. Our results show that 90% of the burned surface were at less than 2 km from settled areas. Burned and settled areas (agriculture, villages) were strongly connected, indicating that settlement increased fire activity. The current location of aspen stands corresponds to the areas burned in the early twentieth century.