Climate regimes and fire regimes of the Eastern Canadian taiga 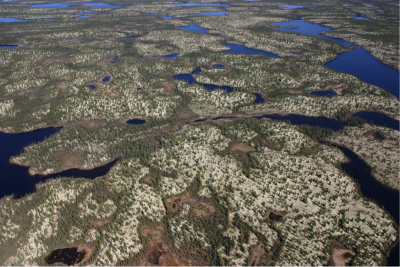 In this research we develop new millennial-long tree-ring chronologies from large stocks of tree remains buried in lakes of the taiga and the forest tundra. These time series are calibrated on recent instrumental temperatures to produce local and supra-regional temperature reconstructions since the beginning of the Christian era. We also perform detailed fieldworks to verify whether the eastern limit of jack pine forests corresponds to a boundary between two distinct fire regimes, if fire size has varied with shifts in climate regimes over the last millenium and if pine quickly responds to changes in fire regime. To achieve these objectives, we systematically sample fire scars on living and dead trees, along with charred trees in lakes, and charcoal at the soil surface. The Eastern Canadian taiga is characterized by high fire activity, with an average burn rate of 2.5% of the land area per year. Empirical and theoretical considerations suggest that climate change will lead to even more fires, resulting in abrupt and large-scale changes in forest composition and structure, including the erosion of their carbon stocks. In this project we use the James Bay and Transtaiga roads, which cross the Quebec taiga in the north-south and east-west directions, respectively, to establish a dense network of monitoring plots. We assume that fires are so frequent and so large in this region that several plots will burn shortly, allowing us to compare pre- and post-fire measurements of forest composition and carbon stocks at the same plots.

Adaptation to fire risk in the taiga Forest fires are an extremely important risk factor in the Quebec taiga, where many infrastructures (villages, hydroelectric complexes, power lines, airports, roads, conservation parks, mines, outfitters, etc.) are found and where several additional infrastructures could be added in the near future. We know that fires destroy fuels, which in turn significantly reduces the risk of a subsequent fire for about fifty years. This negative relationship between fuel age and fire recurrence can be used to map the risk that a new fire will occur at each point of the landscape and the risk that a given infrastructure will be exposed to fire in the short-term (ie next 10- 20 years). We use the Burn-P3 model to simulate the propagation of a very large number of fires in order to assess the fire risk at each point of the landscape, also considering landscape configuration (hydrography, age of the forest mosaic, etc.). Given the fire risk, we test and develop adaptation scenarios for existing and planned infrastructures.

Structure and composition of the preindustrial forest of southern Quebec Forest management plans must increasingly consider the natural range of variability of ecosystems in order to maintain natural ecological processes. It is therefore necessary to consider the changes that have been caused by human activities and their impacts on forests to better predict future changes. However, undisturbed sites that could serve as natural witnesses have become very rare in most parts of the temperate forests of North America. In this project we use historical archives to develop databases of observations made in forest before significant human impact in the temperate zone of Quebec. The first surveyors that divided the land before settlement systematically recorded in their notebooks observations on forest composition. We analyse and localize precisely these observations in order to see how the forest varied between regions before settlement. We also use old inventories made by logging companies in the early twentieth century in order to reconstruct the forest structure, as well as the corresponding stocks of dead wood.