The objective of this thesis was to perform dendroecologic and dendroclimtic analyses of large stocks of sub fossil trunks in lakes of the north american taiga. We have reconstructed the climatic trends of the last millennium, as well as fire disturbance impacts in lakeshore forests with high spatial and temporal resolutions. 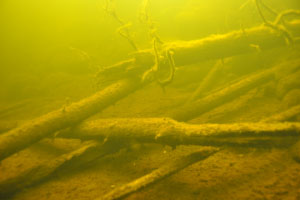 In the first chapter (Gennaretti et al. 2014a), tree ring dating of tree remains from the littoral zone of five lakes allowed us reconstructing stocks and fluxes of large woody debris (Figure 1). Results show that fire disturbance in the lakeshore forests strongly influence inputs of woody debris in lakes, generally interrupting inputs over more than a century. Fire impacts propagate in time over several centuries due to the slow decomposition of tree remains into the littoral environment.

In the second chapter, (Gennaretti et al. 2014b). We compared the structure and composition of lakeshore forests to the stocks of tree remains that have accumulated into the littoral zone. Results shows that fire disturbance during the last millennia decreased tree density and excluded balsam fir in forests of the study area. Fire impacts in the lakeshore environment were fire-specific and lasted for several centuries.